Ever since I saw a tutorial for corpse nails on the Nail Nerd’s blog, I have been wanting to try them and what better time than now! I was thinking how to tie this in to Halloween and after just watching The Walking Dead the other day, came up with the idea that the hand could be on an infected zombie bitten body and about to return from the dead at any moment! 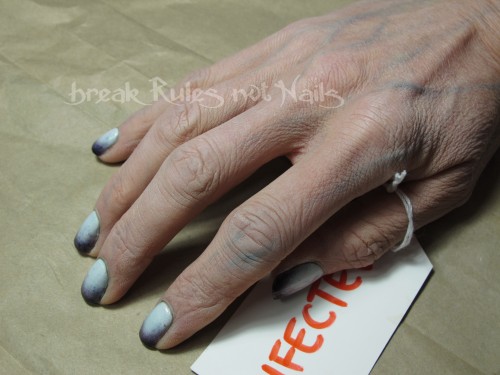 I wanted to take the Nail Nerd’s idea and little further and make a corpse hand as well, so firstly I drew over my veins with blue eye liner. Then I mixed some white acrylic paint and make up foundation together and applied that to my skin with a make up sponge in a dabbing motion. I found once the acrylic paint is half dry it comes off again, so its best to start at one place (say the thumb) and work your way to the other side (pinky) and you don’t have to be super quick, but you need to get the paint on and keep moving. It probably took me a few minutes to cover my whole hand. I did have to wash it all off and start again. 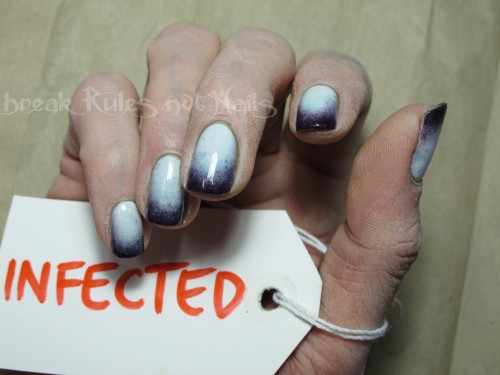 I followed the Nail Nerd’s photos, but I don’t have any of the same colours, so I started with a base of OPI “My Boyfriend Scales Walls”, a nice corpse grey! I added pale blue, which did get lost and some bruised blood, warm grey tones. The tips are OPI  “Every Month Is Oktoberfest” which has such nice bruised purple undertones. 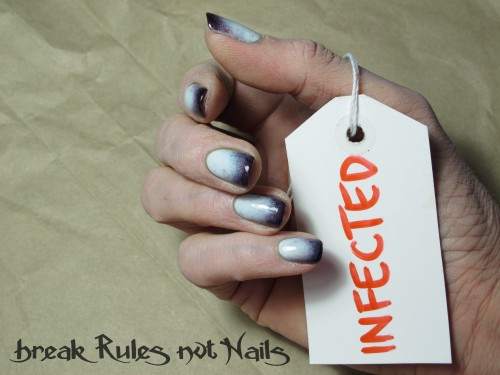 Thanks for looking, I’m off to watch 28 Weeks Later for more inspiration! Did I mention I really like Halloween??